This is cutting edge?

I obtained this today from a co-worker. (S)he let me view it first before (s)he told me it was an internal communication from within a member of the BIG OIL community. (S)he mentioned the company, but I'll leave that information off the table. Trust me on this; this person knows people who know people.

I'm not quite sure what was more disturbing; the write-up or the pictures. The photos tell the story, and the intro (hopefully) preps you for the rest. Please read it carefully and think about all the promises and claims being made by the natural gas drillers invading our commonwealth. Think something like this can't happen in PA?  Have you read the headlines lately?

You may have heard the news in the last two days about the Deepwater Horizon drilling rig which caught fire, burned for two days, then sank in 5,000 ft of water in the Gulf of Mexico. There are still 11 men missing, and they are not expected to be found.

The rig belongs to Transocean, the world’s biggest offshore drilling contractor. The rig was originally contracted through the year 2013 to BP and was working on BP’s Macondo exploration well when the fire broke out. The rig costs about $500,000 per day to contract. The full drilling spread, with helicopters and support vessels and other services, will cost closer to $1,000,000 per day to operate in the course of drilling for oil and gas. The rig cost about $350,000,000 to build in 2001 and would cost at least double that to replace today.

The rig represents the cutting edge of drilling technology. It is a floating rig, capable of working in up to 10,000 ft water depth. The rig is not moored; It does not use anchors because it would be too costly and too heavy to suspend this mooring load from the floating structure. Rather, a triply-redundant computer system uses satellite positioning to control powerful thrusters that keep the rig on station within a few feet of its intended location, at all times. This is called Dynamic Positioning. The rig had apparently just finished cementing steel casing in place at depths exceeding 18,000 ft. The next operation was to suspend the well so that the rig could move to its next drilling location, the idea being that a rig would return to this well later in order to complete the work necessary to bring the well into production.

It is thought that somehow formation fluids – oil /gas – got into the wellbore and were undetected until it was too late to take action. With a floating drilling rig setup, because it moves with the waves, currents, and winds, all of the main pressure control equipment sits on the seabed – the uppermost unmoving point in the well. This pressure control equipment – the Blowout Preventers, or ‘BOP’s” as they’re called, are controlled with redundant systems from the rig. In the event of a serious emergency, there are multiple Panic Buttons to hit, and even fail-safe Deadman systems that should be automatically engaged when something of this proportion breaks out. None of them were apparently activated, suggesting that the blowout was especially swift to escalate at the surface. The flames were visible up to about 35 miles away. Not the glow – the flames. They were 200 – 300 ft high.

All of this will be investigated and it will be some months before all of the particulars are known. For now, it is enough to say that this marvel of modern technology, which had been operating with an excellent safety record, has burned up and sunk taking souls with it.

The well still is apparently flowing oil, which is appearing at the surface as a slick. They have been working with remotely operated vehicles, or ROV’s which are essentially tethered miniature submarines with manipulator arms and other equipment that can perform work underwater while the operator sits on a vessel. These are what were used to explore the Titanic, among other things. Every floating rig has one on board and they are in constant use. In this case, they are deploying ROV’s from dedicated service vessels. They have been trying to close the well in using a specialized port on the BOP’s and a pumping arrangement on their ROV’s. They have been unsuccessful so far. Specialized pollution control vessels have been scrambled to start working the spill, skimming the oil up. In the coming weeks they will move in at least one other rig to drill a fresh well that will intersect the blowing one at its pay zone. They will use technology that is capable of drilling from a floating rig, over 3 miles deep to an exact specific point in the earth – with a target radius of just a few feet plus or minus. Once they intersect their target, a heavy fluid will be pumped that exceeds the formation’s pressure, thus causing the flow to cease and rendering the well safe at last. It will take at least a couple of months to get this done, bringing all available technology to bear. It will be an ecological disaster if the well flows all of the while; Optimistically, it could bridge off downhole.

It’s a sad day when something like this happens to any rig, but even more so when it happens to something on the cutting edge of our capabilities. The photos that follow show the progression of events over the 36 hours from catching fire to sinking. 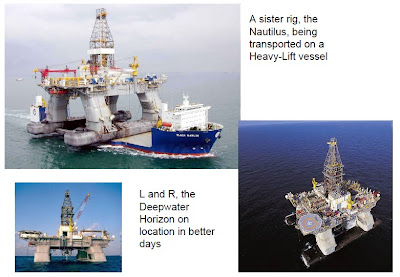 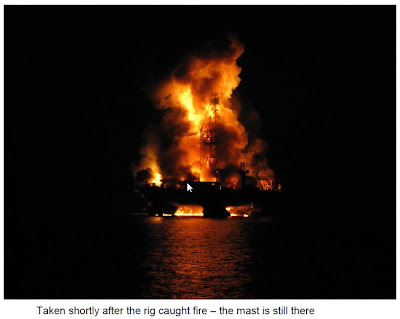 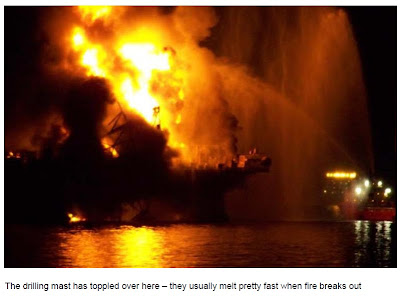 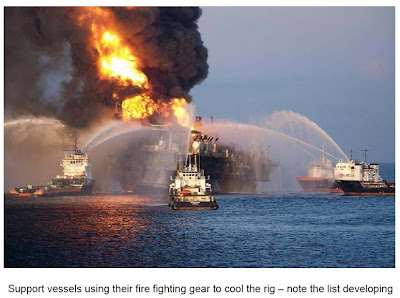 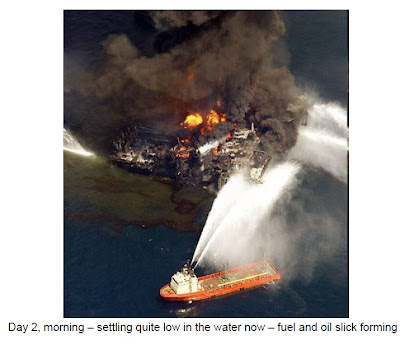 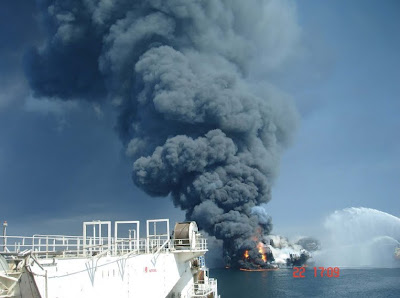 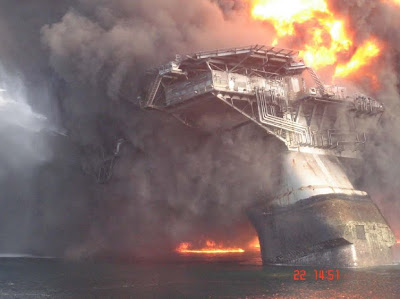 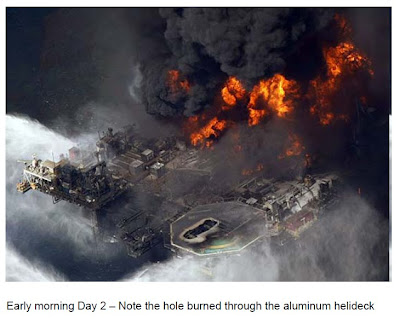 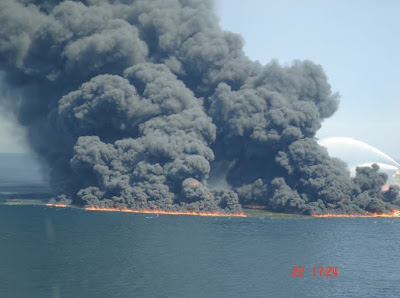