In three weeks, it'll be one year since Bradford County residents noticed that the Susquehanna River was bubbling methane where it never had bubbled before. And, as of a few weeks ago, it's still bubbling.

If you haven't been keeping up with events over the past year, we've had more contaminated wells, more spills, more fatalities, and more plain old "all is well" bullsh*t being shoveled our way by our elected officials in Pennsylvania and Washington.

I wanted to ralph when I heard that our good governor was paddling down the same river he is allowing to be degraded as a thinly-veiled ploy to promote tourism. I do give him credit, however, for being smart enough to wear a personal flotation device and bring along security. I hope there was more than one on the water.

As we all know, you just can't predict what can happen on the river. 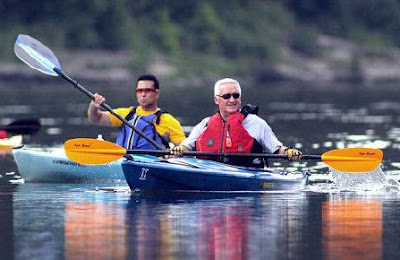 Nice shades, Tommy. Who's that on your flank?
Posted by Renegade at Friday, August 12, 2011 No comments: