IOGA: A Wellspring of Lies

The web is already jam-packed with stories about yesterday's announcement by American Rivers that the upper Delaware had been named as the nation's most endangered river due to gas drilling. In reading several of the articles this morning, I found it interesting that the speakers at the press conference along the Delaware River were actually heckled and confronted by the pro-drilling peepulz.

One of the PDP's quotes, which I've heard multiple variations of, went like this:


"I don't know how they can conclude that, when hydraulic fracturing has never harmed a drop of drinking water," countered Jim Smith, spokesman for the Independent Oil and Gas Association of New York. "In 60 years of hydraulic fracturing across the country, more than a million wells have been fracked, including 14,000 in New York."

Well, Jimbo, here's the part you left out. The vast, vast, vast majority of those wells were vertical wells only. One hole, straight down, one frack. What's going on today with horizontal hydrofracturing is a whole new ballgame, and you know it.

I really am getting tired of these peepulz and their lies.

Thanks, again, to American Rivers and the multiple groups that partnered to make this happen. Maybe, just maybe, the disparate troops in the Susquehanna watershed will take a lesson from this. As it always does, time will tell. 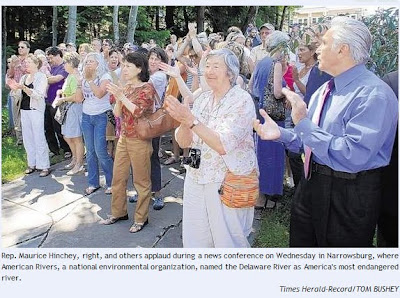